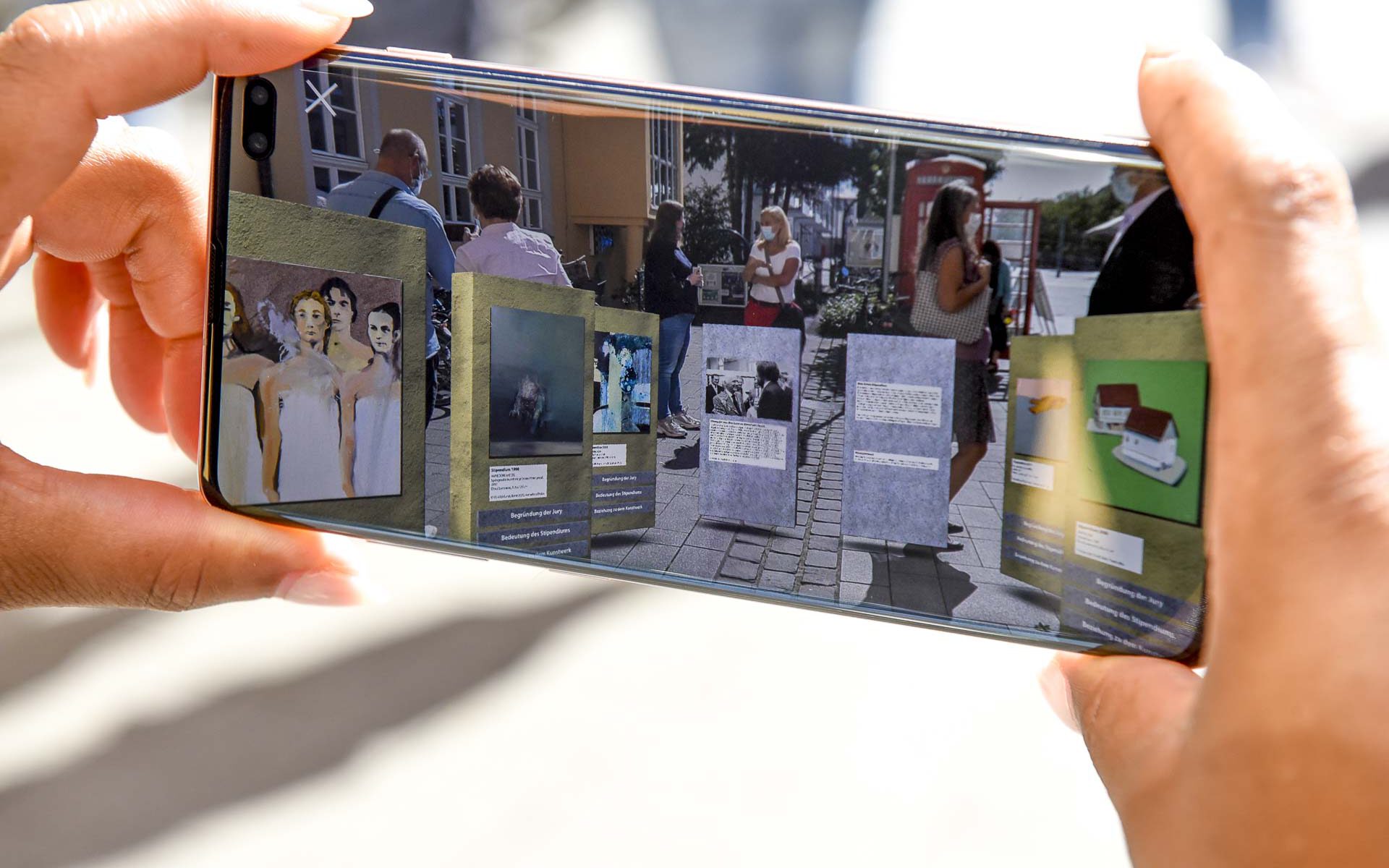 Augmented Reality for use in public spaces

They are all curious about the new view of images and texts that merge with the actual, visible world in the Max Ernst circuit on the screen of a smartphone, as if they were part of it. “Augmented Reality” is what happens, translating as much as “extended reality”.

A hand-picked circle of guests was allowed to sniff out the newly created digital world around the surrealist Max Ernst.They are people who stand for Brühler Culture, such as Gaby Zimmermann from the Brühler Kunstverein and the chairman of the culture committee Hanns-Henning Hosman, and those who want to promote the digitalization of the city “on the way to tourism 4.0”, such as Sascha Lehner or Andreas Esser from the association “Brühl digital e.V.”. Men and women from the administration are there, as is Nora Schenk from the city’s event team and, of course, a journalist.

Similar to scanning a QR code, they hold the smartphone lenses via symbol images glued to the bottom of two test running stations.By a helpful tap on the start button, the employees of the Brühl-Tourism department set the software in motion.For months, Alina Schwalb and Hannah Grob have been collecting and sorting photos, images and text content for the virtual exhibition.

Max Ernst in texts and pictures

Hannah Grob sets the software in motion at the Max-Ernst-Brunnen in front of the town hall.And provided you use your smartphone in the right place in the right place, for example one of the turtles, then you can read how Max Ernst used spoons, plates and bowls, i.e. simple household materials, to design the animal sculptures. There are photos with explanatory texts of the Brühler delegation, which asked Max Ernst in France for the re-production of some fountain figures in Amboise for a Brühler version. Or viewers: inside you can admire the photographic image of the life-size fountain cake, which pastry chef students served on the market square in front of the town hall for Max Ernst’s 100th birthday.

In addition, a life-size portrait of the artist appears on the screen, drawn by Willi Frommberger.Henning Hosmann, chairman of the Committee on Culture, describes a portrait that was as suddenly gone as it appeared. To present the software prototype for the Max Ernst Circuit, he shared a mobile phone with Wilfried Becke, head of the department of order and culture. On the stairs to the town hall, the two go to their knees with a fixed view on the screen, because there is obviously something to read near the ground.

When exploring the surroundings of the fountain through the screen using augmented reality, the participants soon learn that it is still worthwhile to keep an eye on stairs and water basins, because one does not want to open one’s knees or even take a bath.

The search for motifs of “augmented reality”, also on the ground or above the usual height of view, is part of the interactive action, and roughly represents the situation in a museum, where there are often still things to discover on the ground or in hidden corners, explains Axel Steinkuhle, “Chief Executive Officer” of the Cologne-based developer for virtual reality and augmented reality “Evrbit”.He considered the launch of the prototype with guests at two real playgrounds of the future app to be “wonderful”. It shows “what works well, what works badly”. Especially in the case of potential, real stumbling blocks in urban architecture, there is still a need for improvement.At Pokemon GO, even people jumped off cliffs, the software developer points out.

“The development of such an app for public space is unique,” said Axel Steinkuhle.Until now, it has been used in exhibitions of works of art or for the functional explanation of machines in industrial halls.It is also crucial to optimize the craft of the software developers to the success of the technology to such an extent that the technology literally disappears and becomes magic for “people out there”.

Brass plates in the ground as starting points

It will take until the end of the year, perhaps early next year, for the app to be released. Until then, the city also has to clarify some publishing rights, for example for used images, explained the cultural and tourism manager Oliver Mülhens.

Signs and starting points must first be accommodated on ten motifs, taking into account the protection of monuments, Steinkuhler said.It is conceivable to insert brass plates with the image motifs to start the app into the pavement. They are places like the birthplace of Max Ernst in Schlossstraße, where the journey through time begins in the 1890s, the castle Augustusburg or the church of St. Mary of the Angels.

Each station dedicates itself to a special phase of Max Ernst’s life and encourages reflection or smiles, said Mayor Dieter Freytag. The new circular route provides a new impetus for the Brühl destination and digital development.”With augmented reality, you can create experiences in beautiful, natural places without having to intervene in a big way,” said Sascha Lehner of the “Brühl digital” association, who recently introduced the “Hiero Brühl App” to strengthen the Brühler trade. He promised to integrate both apps.