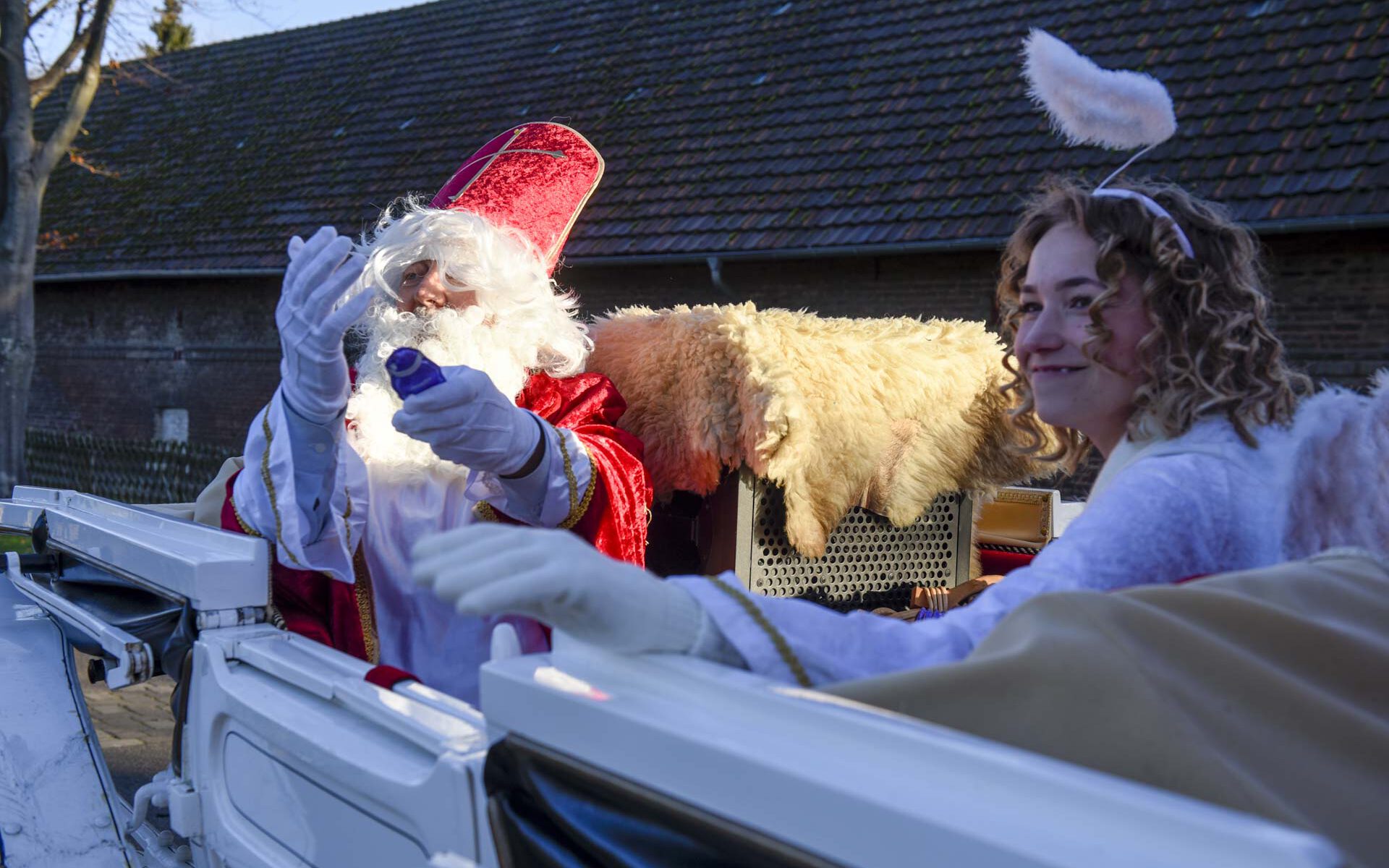 Not the right time for the “Hillije Mann” inside the house

He has never been such an “open-air Nikolaus”, says Bruno Gronenborn, and for many, many years he has already represented Nicholas in the kindergarten “Fliester Schreihäls”. At the Johnen family farm in Fliesteden on Saturday, he climbs into a white carriage for the exit through the village.There he takes a seat next to a large basket with chocolate nicotine lice and an even larger loudspeaker box, from which “Last Christmas” already resounds. Slanted opposite there is still room for Jaqueline Beyenberg, an angel all in white, with mouth/nose protection.

Nicholas does not have much time to practice his role. “How does a Nikolaus actually beckon?” he ponders.

From the farm, coachman Lorenz Hemmerich leads the two moulds in a large arc into Jennerstraße. There, the question of a dignified greeting from St. Nicholas fades into the background anyway, because here children are already waiting behind garden fences and on doorsteps and they want above all sweet things. With all the necessary distance, the companions Rebekka Esch-Johnen and the mayor Elisabeth Hülsewig take care of the distribution. “I feel personally responsible for the Christmas atmosphere in the village during the Corona times,” says Hülsewig. This time, the “Cultural and Homeland Association” got the carriage and the “May-Guys” the chocolate Santa, after the traditional visit to St. Nicholas in the kindergarten had been skipped. The carriage ride is financed from the well-stocked Kirmeskasse.

Farmers in North Rhine-Westphalia found an answer to the question “What can we do about Nicholas for children and seniors, because everything is forbidden and closed because of Corona?” Colourful and glittering like the Christmas trees, adorned with bright reindeer, snowmen and just St. Nicholas, the tractors showed, also steered farmers in the Rhein-Erft-Kreis on Saturday evening.

From the farm of the farmer Heike Bulich and Andreas Zwahr from Wissersheim, who had invited, they went via stops at retirement homes and hospitals via Nörvenich and Vettweiss to the stroll in Kerpen districts.

They made a detour in Neu-Manheim, where many waited patiently on the road in the late evening for the rather delayed trough of the tractors. Peter Krauß himself a farmer in Neu-Manheim and at the wheel of his tractor steered the colourful Tross into the resettlement village. “The response to the colorful column with a lot of music on board is overwhelming,” Krauß said. Firefighters had already driven through the village before the arrival of the tractors, from loudspeakers they sounded the people with Christmas music.

Farmers had called their action “a spark of hope.” On Sunday evening, the farmers marched through Erftstadt and at the Brühler Hospital. The idea originated in the independent advocacy group originally founded as a Facebook group called “Land creates connection”, or LSV for short, Zwahr said.

Nicholas with elf and reindeer in Buir

“In full outfit” on Sunday, St. Nicholas in Buir also showed himself as Niklas Köppe, together with his wife Nadine as an elf on the platform of an open wagon. Andreas Lehmann and Pascal Bindhammer decorated their heads with reindeer horns, steered the wagon through the village on an old tractor. They had prepared more than 300 bags of sweets and put them at the front door of children who had recently had to go into quarantine. They were supported by the “Sebastianus Schützen” and the Club “Freunde alter Technik Buir”.

Drive through at “Aachener Tor”

As an alternative to Nikolaus’s home visit, the employees of the city and city marketing department of the district town of Bergheim had come up with a “Nikolaus-Drive-through” for families with a car at the Aachen Gate.For contact-free handover to the children, The local Nikolaus let the confectionery slip into the cars via a tray.