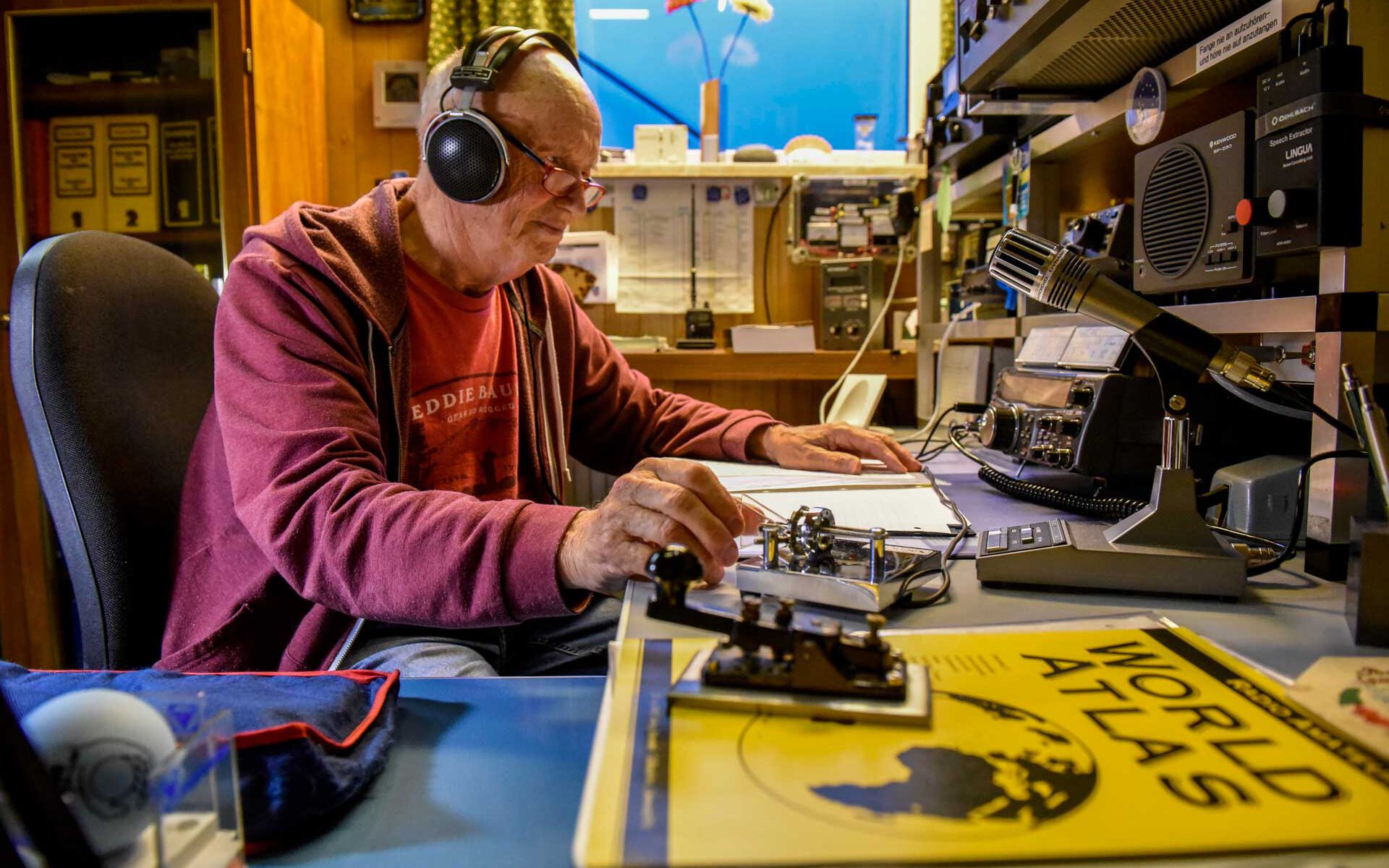 The world of wireless telegraphy has been marked by many abbreviations since the beginning of the 20th century.Even in today’s digital age, everyone still knows the sequence of numbers “SOS” as an emergency call.With “CQ” usually starts a dialogue, it is the abbreviation for “Come Quickly” and is the world-famous call to all radio operators who are able to receive the sent signal to respond quickly.

The abbreviation “SK” means “Silent Key” in the radio language. “SK” attached to the internationally unique phone number of a radio amateur tells other radio operators about his death, says Heinz Schlagheck.

During the Corona lockdown in the spring, when the death toll in Italy and France reached a sad climax, he received a defunct line of Silent Keys from France on the radio in the basement of his detached house. The broadcaster did not accept his request for conversation, saying that he had instead continued to broadcast his telegraphic memory in honour of many deceased amateur radio operators.

He has not experienced anything like this before, says the 80-year-old, whose heart has been beating for amateur radio since childhood. As a 14-year-old, he had already made the first world receivers out of simple electronic components. On the one hand, it was always the technology that fascinated him, on the other hand the prospect of a conversation, a dialogue, an exchange with other radio-enthusiastic people, Schlagheck says in a conversation on the terrace of his house.Stefan Unger has also been added, and the 58-year-old has been the chairman of the Hürth local club in the German Amateur Radio Club for eleven years.

Since 1980, Schlagheck has been on the shortwave band under the designation DL3KAS in speech radio and in telegraphy, after mastering the first challenges in his career and family. A selection of about 4000 QSL cards on the pinboard above its technical equipment, postcards with which radio operators confirm each other’s contact, document radio contacts around the globe, to Japan, Canada, USA, Australia.

A document reminds him of a radio call he received from Florida on August 24, 1992.The holiday resort of two radio amateurs who asked him to call her sister, who was in Berlin at the time, with the message “We’re fine”, recalls Schlagheck. “People helping people” the two radio operators named Ursula CP1BW and Walter CP1CM from La Paz in Bolivia have overwritten the thank you certificate in memory of that night.

The document aptly describes the spirit of amateur radio operators, the unspoken obligation to provide the technical skills in an emergency, Unger explains. It was Italian and Austrian radio amateurs who, for example, drew attention to the accident in the first hours of the Galtür avalanche disaster in February 1999.In the new Hürther fire station, a room for radio amateurs was also set up to provide communicative support to firefighters if necessary.

… and with the button

Schlagheck is one of the radio amateurs who love telegraphy using buttons and Morsealphabet.Incidentally, the art of Morsetelegrafie was included in the German list of intangible cultural heritage in 2014, Schlagheck knows. She is currently experiencing a renaissance because of her simplicity, adds Unger, while Jürgen Wagner (DL4KE) gives Morse courses in Hürth. You learn the alphabet, “each letter has its own sound”.

The passion for the Morsen had been aroused by one of the boys from Neviges near Velbert, namely Karl Stellberger, known to amateur radios as DJ2DX until his death. Due to his good relations with the local evangelical pastor, he managed to stretch a 40-metre-long antenna from his kitchen window to the church tower, Schlagheck describes today.

When it comes to sparking, Schlagheck attaches particular importance to sending as much as possible with the simplest possible devices and as little power as possible, a maximum of five watts. It is similar to a competition discipline in radio circles, they call it “QRP”.

Sparks with the app

But Unger shows how sparks also work with the Echolink app via the smartphone in a short conversation with an amateur in Berlin Spandau, wherehe immediately shows the virtues of radio amateurs, a good tone is maintained. “Regardless of skin color, religion or political beliefs,” Unger says.

Of course, the number of radio amateurs has shrunk in view of the ubiquity of digital communication channels, says the chairman. The Hürther Ortsverein had become a catchment pool for Erftstädter like Schlagheck, for Cologne and Brühler radio amateurs.

After all, the 83 members are again increasingly in the band, according to Unger. And if only up to 25 people had come to previous meetings, more than twice as many radio amateurs would attend the meetings, which they recently held because of Corona via a VW local frequency. Only new registrations are still lacking.