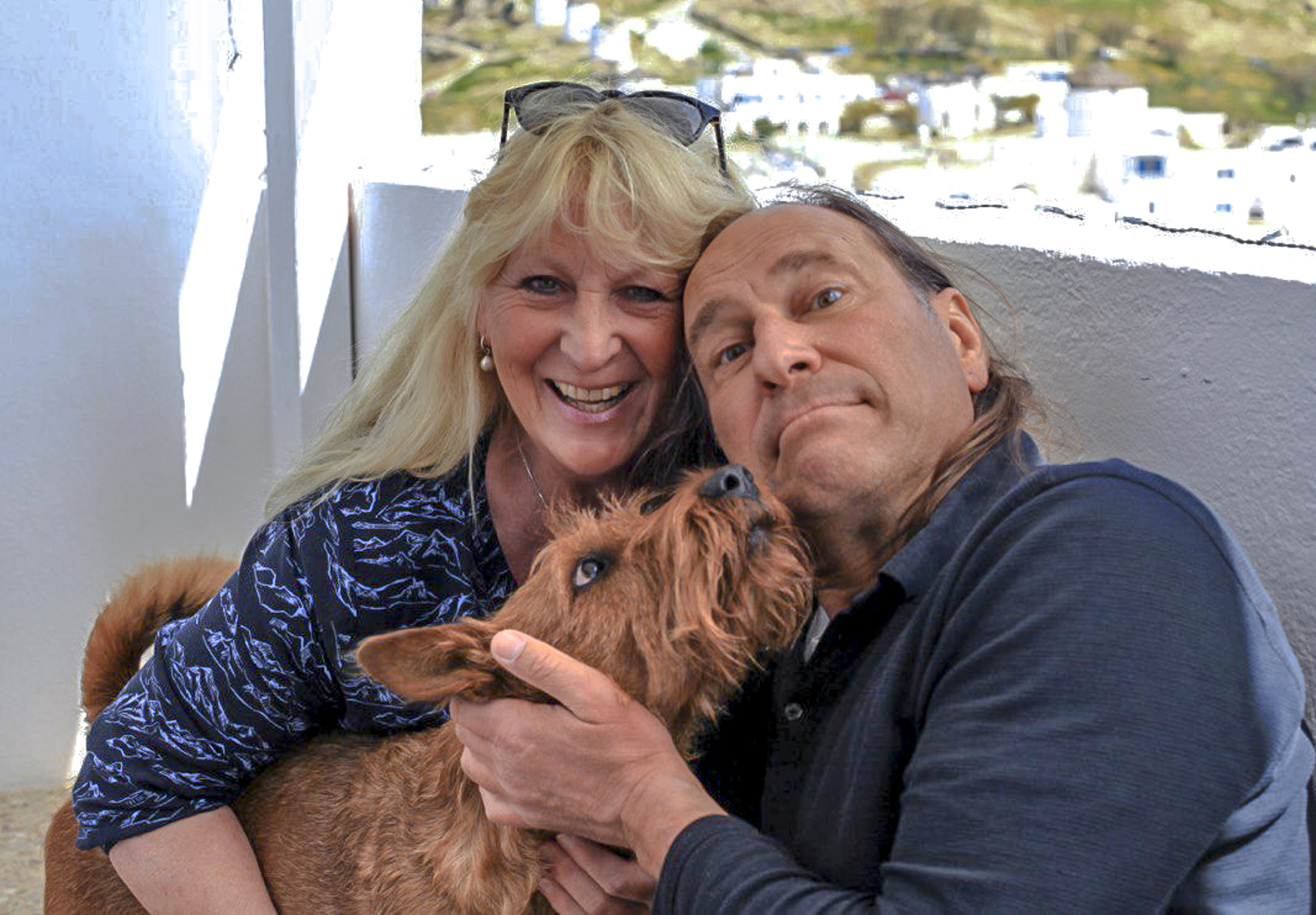 From the fulfillment of a lifelong dream

Anyone who asks Herman-Josef Hilbrecht and Brigitte how they are these days via a Messenger app may be surprised to receive a selection of springtime photos and greetings from their second home, the Greek island of Ios. How the painter and guitarist from Kerpen, his wife and dog Olsen (here they all show themselves via selfie) came to live on the Mediterranean island is quickly told.

In the print edition of the art magazine “ARTios TYPOS” from August this year there is a portrait about Hermann-Josef Hilbrecht. Under the title “Art is expression, a human feature” Mary Sampani introduces the painter and rock guitarist from Horrem to her readers. Printed are some selected paintings. In the interview, the journalist introduces him as a “resident,” that is, as a future inhabitant of the small island in the middle of the Aegean Sea.

As early as 1980, he fell in love with the island, with its sunset behind the church next to a palm tree, with its rock music in open-air clubs under starry skies, swimming in the sea by moonlight, Hilbrecht tells readers. When asked about important stages in his life, he describes how he gave up his computer job at an insurance company after 15 years in order to devote himself to music and painting, his apprenticeship with the painter Otto Günter Altena, and how the fantastic cover illustrations by Roger Dean on well-known albums by the British rock band Yes inspired him to paint and make music in equal measure.

“For me, tones and colors, music and painting belong together,” he says there, just as familiar with the strings of a guitar as with a brush and paint. And if you ask Hilbrecht, he directly compares the visible spectrum of colors with its typical vibrations and effects on human perception and the soul with the frequencies of notes.

The illustrations in the art magazine show a view of the future home town of the painter Chora located on the mountain with said church on the palm tree as a fantastic realism, a landscape called “In the Cage” as plastic as abstract, the watercolor “Dolphins in the Light” and a sensual “Venus”, the Roman version of the Greek Aphrodite.

How did it come about that he found his way into the Olympus of artists on the island, which has only a little more than 2,000 inhabitants? In successive issues, “ARTios TYPOS” presented a series of artist portraits, for example on the Austrian Léos Aqua Aqua, the founder of Aquatism, or the poetic surrealist Helmut Kand. Editor Akis Bouzalakos had wanted to create his own newspaper without the usual catastrophic news of the world, Hilbrecht says.

A home of their own was needed

The story is linked to the fulfillment of a lifelong dream of Brigitte and Hermann-Josef Hilbrecht. After decades of regular visits to the island, they finally wanted to have a home of their own for themselves and their terrier Olsen. After the death of his mother the use of the inheritance sum had therefore been fast certain, describe Hermann and Brigitte Hilbrecht. The friend and realtor Alex found a well-preserved upper floor of a two-story house in the middle of the picturesque capital Chora, in the “Odos Omiros”, the street of Homer.

During the visit of his friend and engineer Manolis Papakonstantinou, who offered him to have the apartment declared similar to an entry in the land registry, Hilbrecht mentioned that he also paints. Immediately Papakonstantinou had called his wife, Mary Sampani. She said she liked the photos of his painting on his cell phone and computer.

With the purchase of the house in Chora, their life planning has taken a new turn, says the couple. “We are turning everything upside down,” says Brigitte. The teacher is now looking forward to early retirement. They have already made one move within Germany, from their own familiar house in Horrem to one for rent with a garden in Nideggen, Eifel.

Of course, he wants to continue with his band projects that he has built up in recent years: “Moonlight Drive” and “Digger”. The combo “Moonlight Drive” would almost have given its debut concert last year, if Corona had not intervened. Now the drummer has left the band, the band is looking for a new line-up either for drums or keyboard. The Türnich singer Daniela Klimke has remained, Uwe Greb actually keyboardist, has taken over the drums, the bass is played by Peter Mattsson.

A new CD is in the works with the formation “Digger”. With the musicians Stefan Peetz and Matthias Schäfers songs were created in the non-contact time mainly with solo recorded tracks on the computer. For the drums he was able to win the multi-instrumentalist Billy Sherwood, who plays bass in today’s “Yes” line-up. Samples can be heard on the Internet music portal “Soundcloud”:

An exhibition on the island of Ios is also being planned. Hermann Hilbrecht is thinking about how he can bring his pictures to the island most economically. The place in his old Mercedes station wagon is not sufficient for the partly large-sized pictures. Besides new pictures are to be with, which he would like to paint still. Hilbrecht is thinking of motifs from Greek mythology.